Webinar on Risk and Course of COVID-19 in AA and PNH patients, Including Vaccination Strategies

Webinar on Risk and Course of COVID-19 in AA and PNH patients, Including Vaccination Strategies 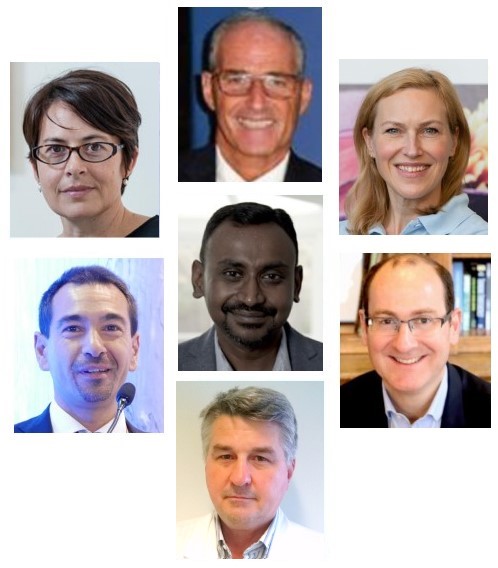 Maria Piggin is a PNH patient who founded PNH Support in 2015. Maria is a European Patients' Academy of Therapeutic Innovation's (EUPATI) Fellow, a EuroBloodNet ePAG and chairs the PNH Global Alliance. Maria also works for the NIHR Imperial Patient Experience Research Centre within the School of Public Health at Imperial College, London supporting publicly funded researchers to involve patients and the public in their research.

Pascale Olivia Burmester is born in 1971 in Germany and has a Master of Educational Science. She is a AA and PNH patient, transplanted in 2013 who supported since 2005 by co-founding a self support forum. She is CEO of the German foundation "Stiftung lichterzellen", where she provides patients and family with information, carries out multiple projects for patients and families and works as a patient advocate. As a member of the board of the PNH Global Alliance, she has a seat in the PNH Registry and is especially engaged in the scientific development of a AA/PNH-specific Quality of Life questionnaire. Finally, she is involved in QoL-study projects.

Professor Carlo Dufour works in G.Gaslini Research Children's Hospital, Genova, Italy, the largest, multi-specialist pediatric hospital of the country, where he chairs the Hemo-Onco- HSCT Pole and the Hematology Unit where have seat the national Registry of Neutropenia, the national Registry of the Alps and related disorders and the national Data Base of Fanconi Anemia. He founded the Marrow Failure Syndromes Study Group within the Italian Pediatric Hemato-Oncology Association (AIEOP). He is the author or co-author of over 200 international publications and of various hematology textbooks and textbook chapters. He acts as a reviewer for top ranking international journals including New England Journal of Medicine, Journal of Clinical Oncology, Leukemia, Clinical Immunology and Blood. He serves as an expert evaluator for different institutions including the French Registry for Rare Diseases, the Fanconi Anemia Research Fund INC (US), the Leukemia and Lymphoma Research Foundation (UK), the American Society of Hematology Education Program. He acted as the chairman of the Working Party of the Severe Aplastic Anemia (WPSAA) and as a Board member of the European Society for Blood and Marrow Transplantation (EBMT). He currently serves as the chairman of the Scientific Working Group on Granulocyte and Constitutional Marrow Failure Disorders of the European Hematology Association (EHA). Within EHA he is a member of the SWG Unit, of the Education Committee and of the Guidelines Committee. In 2015 he received by the Fanconi Anemia Research Fund. INC (FARF) the discovery award for participating in the identification of gene FANCT. Since December 2019 is a member of the Scientific Committee of the American Society of Hematology.

In December 2019 he was awarded for scientific contribution in Fanconi Anemia by the Spanish "Fundacion en la Anemia de Fanconi". In August 2020 has been awarded by the EBMT with the Van Bekkum award, a recognition reserved for best scientific communication of the year, as Co-PI of the prospective randomized trial RACE (Comparison of classical IST ± Eltombopag) in Severe Aplastic Anemia.

Professor Antonio M Risitano is Director of Hematology and Hematopoietic Stem Cell Transplantation at the AORN San Giuseppe Moscati in Avellino, and Professor of Hematology at the Federico II University of Naples. After his education at the Federico II University of Naples, Prof. Risitano spent 3 years at the Hematology Branch of the National Institutes of Health in Bethesda, where he dedicated to experimental work on the pathophysiology of bone marrow failure syndromes, under the guidance of Dr. Neal Young. In 2004 he moved back to Naples where he served as Research Associate and then Assistant Professor in the Hematology unit, focusing paroxysmal nocturnal hemoglobinuria, aplastic anemia as well as of stem cell transplantation. From 2010 to 2020 he was Director of the bone marrow transplantation unit and Associate Professor of Hematology at the Federico II University, before being appointed as Head of Hematology in Avellino in July 2020. Prof. Risitano pioneered the development of novel treatments for aplastic anemia and paroxysmal nocturnal hemoglobinuria through seminal preclinical and clinical works.

Passionate about the delivery of clinical trials, he is Coordinating Investigator for a number of early/late phase clinical trials. His current drive is to bring novel therapies for PNH, AA, TP53 mutated myeloid neoplasms and the improvement of thrombocytopenia.

His Translational Research work is about molecular/immunological pathogenesis of MDS and aplastic anaemia, particular focus on overlap disorders. He is Bloodwise foundation and British Society of Haematology (BSH) senior clinical research fellow.

He has authored/co-authored over 130 articles in peer-reviewed journals, and he has contributed to book chapters in major textbooks.

Professor Peffault De La Tour obtained his PhD in Medicine from the University of Paris - Lariboisière in 2003 and his "Doctorat d'Etat" in Immunology from the Pasteur Institute in 2006. He trained in Hematology at Paris Hospitals AP-HP and did his postdoctoral fellowship at the National Institutes of Health, USA, from 2008 to 2010. He obtained his position as Full Professor of Clinical Hematology in 2014.

He is currently working in the Hematology and Bone Marrow Transplant Department of AP-HP Hôpital Saint-Louis, Paris, France. He is in charge of the reference center for Aplastic Anemia and Nocturnal Paroxysmal Hemoglobinuria (PNH) and the French network on Hematology-immunology rare diseases (MaRIH). He is also coordinator of the Aplastic Anemia Working Group of the European Society for Blood and Marrow Transplantation (EMBT). He is coordinator of the Bone Marrow Failures Subnetwork for the ERN-EuroBloodNet.

Dr Corrado Girmenia received his degree in Medicine from the University "La Sapienza" of Rome and a Postgraduate specialization in Hematology (1991) and Microbiology-Virology (1996). Nowadays, he is the Chief of the Hematologic Emergency Unit of the Department of Hematology, AOU Policlinico Umberto I, "Sapienza" University of Rome, Italy.

Corrado Girmenia has dedicated career in the field of infectious complications in patients with hematological diseases and with other alterations of the immune status. Within this discipline, his areas of research interest and clinical application include fungal infections, bacterial infections, viral infections and supportive care. He is also involved in clinical programs of emergency in hematology and outpatient management. He participated to randomized, controlled clinical studies and multicenter observational studies conducted in GCP in patients with hematologic malignancies.

Registration is closed for this webinar