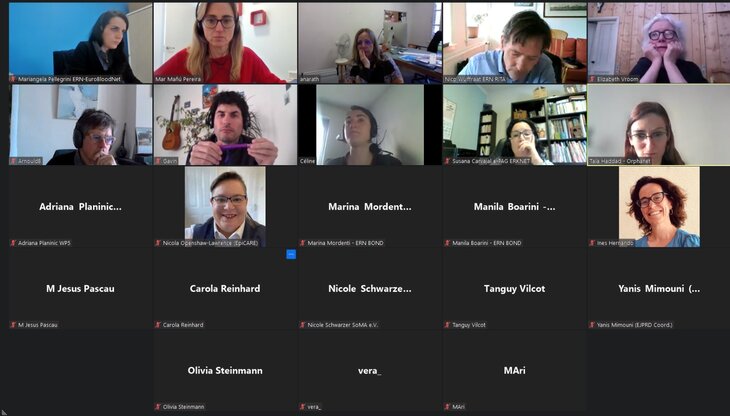 On the 8th and 10th of March it has been held the Kick-off Meeting of the ERICA WP3: during the 2 sessions the team and participants have discussed about PROMs for Rare Diseases and how to build an accessible repository.

The general framework of the ERICA project' WP3 is Patient Centered Research for Rare diseases.  WP3 is led by Ana Rath and María del Mar Mañú Pereira, respectively from Orphanet and ERN-EuroBloodNet, in collaboration with MAPI Research Trust.

Specifically, the WP3's key goal is to promote and disseminate in Europe the adoption of standardized Patient Reported Outcome Measures (PROMs) for rare diseases while ensuring the involvement of the ERNs Health care providers and RDs patients organizations in this process.

WP3 aims concretely to facilitate via the creation of the repository of existing PRO and ObsRO for rare disease the use of those standardized tools that consider patients and caregivers' perspectives in reporting health outcome measures and in the health assessment decision-making process for rare diseases.

Accordingly, the WP3 team would like to reach the following achievements:

Whereas during the second part of the meeting, an interactive exercise has allowed to tackle some needs for the use of PROMS repository, the ideal context of use of RDs PROMs, the expected search engine terms to be inserted in the repository and the expected results.

Results of this exercise are under analysis and will be used for customizing the repository of existing PRO and ObsRO for Rae Disease adapting it as much as possible on expressed needs and expectations.